Written by Max Chiswick and Mike Thompson
on August 20, 2020

Mike McDonald bet ~$200,000 mostly at even money that he could make 90/100 free throws by the end of 2020 with unlimited attempts. He has to define when an attempt begins and he can “reset” at any time to start fresh at 0 made/0 missed.

A friend Mike Thompson and I wrote a post analyzing the math of (a) how likely Mike McDonald is to succeed and (b) what his optimal reset strategy looks like. That post went into some technical details, so we wanted to also make a TLDR/short/clean version so people watching the bet can get a quick overview of the odds and strategy.

Success According to Make Percentage

For simplicity, we assume that Mike has a fixed free throw make percentage. Given this, we can compute how often he will succeed with a variety of make percentages. The computation here is actually how often he’ll make 90 or more out of 100, but the bet terms are much better than this because attempts that start poorly can be reset early. 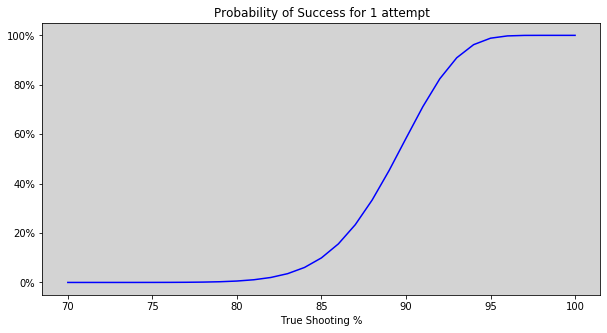 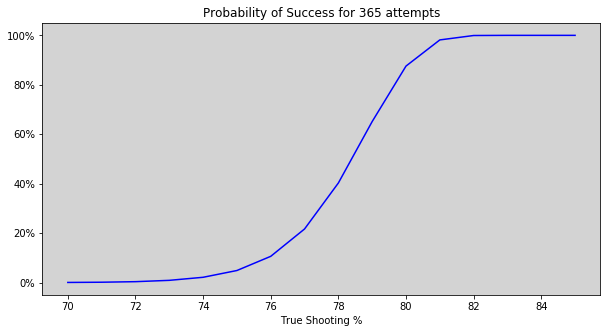 Here we plot the probability of success given 365 attempts, which shows that a make percent of about 78 or higher is pretty crucial. Again, the bet is more favorable than shown here because of the option to reset.

The top figure shows the naive strategy of just shooting until winning (making 90) or losing (missing 11). This approach averages about 50 shots per attempt – still twice as good as having to shoot out the full 100 shots each attempt.

The second figure is using an optimal reset strategy (detailed in the next section). Here each attempt averages only about 9 shots! This seems very low, but we know that 22% of the time the first shot will miss and will be instantly reset and only about 61% of attempts will make it past 2 shots. 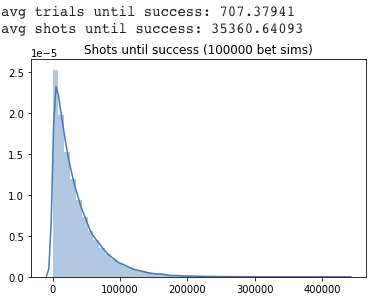 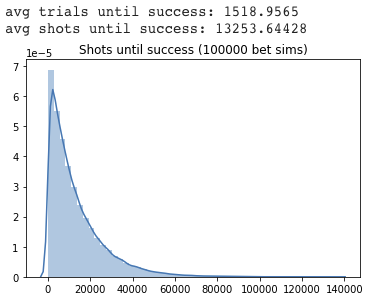 From above we know that if Mike’s true free throw make percent is much worse than 78%, his chance of success is not very good. We computed reset strategies for make %s of 78, 80, 82, 84, and 86 below. The y-axis is shots made and the x-axis is shots missed. The reset strategies are represented by the larger font and the approximate value (assuming that winning = 100) of each position is shown with the smaller font. Red areas are resets and purple are continue shooting.

Full details are in the original post, but in short, this works by setting up a table of every made/missed situation and computing an approximate value of being in each of those situations. Then any spot with value better than the starting position of 0 made/0 missed keeps shooting and any one with value worse than the starting position resets since then it makes more sense to start over.

Reset strategies move pretty linearly with the make percentage, but from the section above, we saw that small differences in the make percentage can be huge, which suggests that working on technique is probably much more valuable than worrying too much about the exact optimal reset strategy. 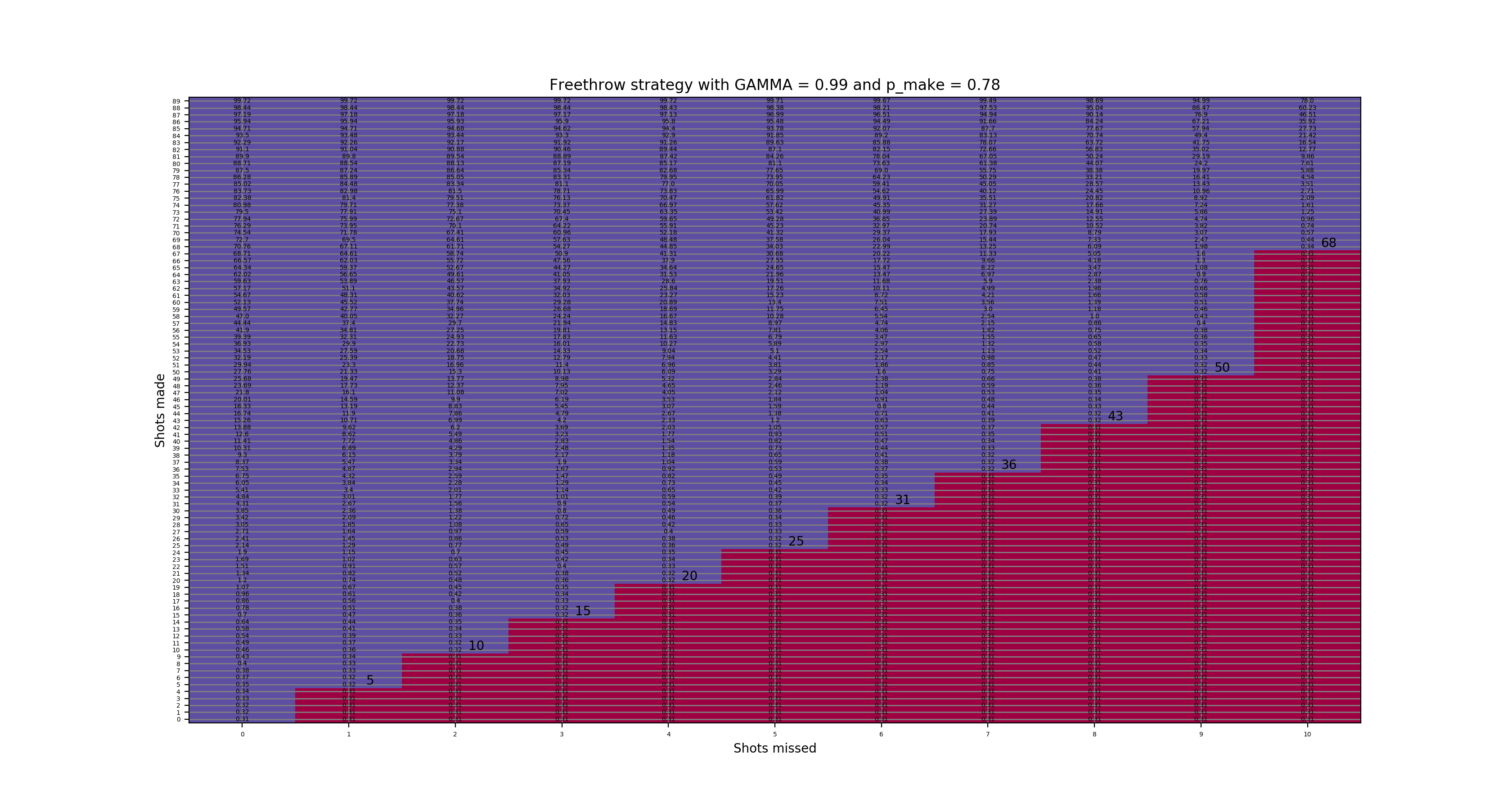 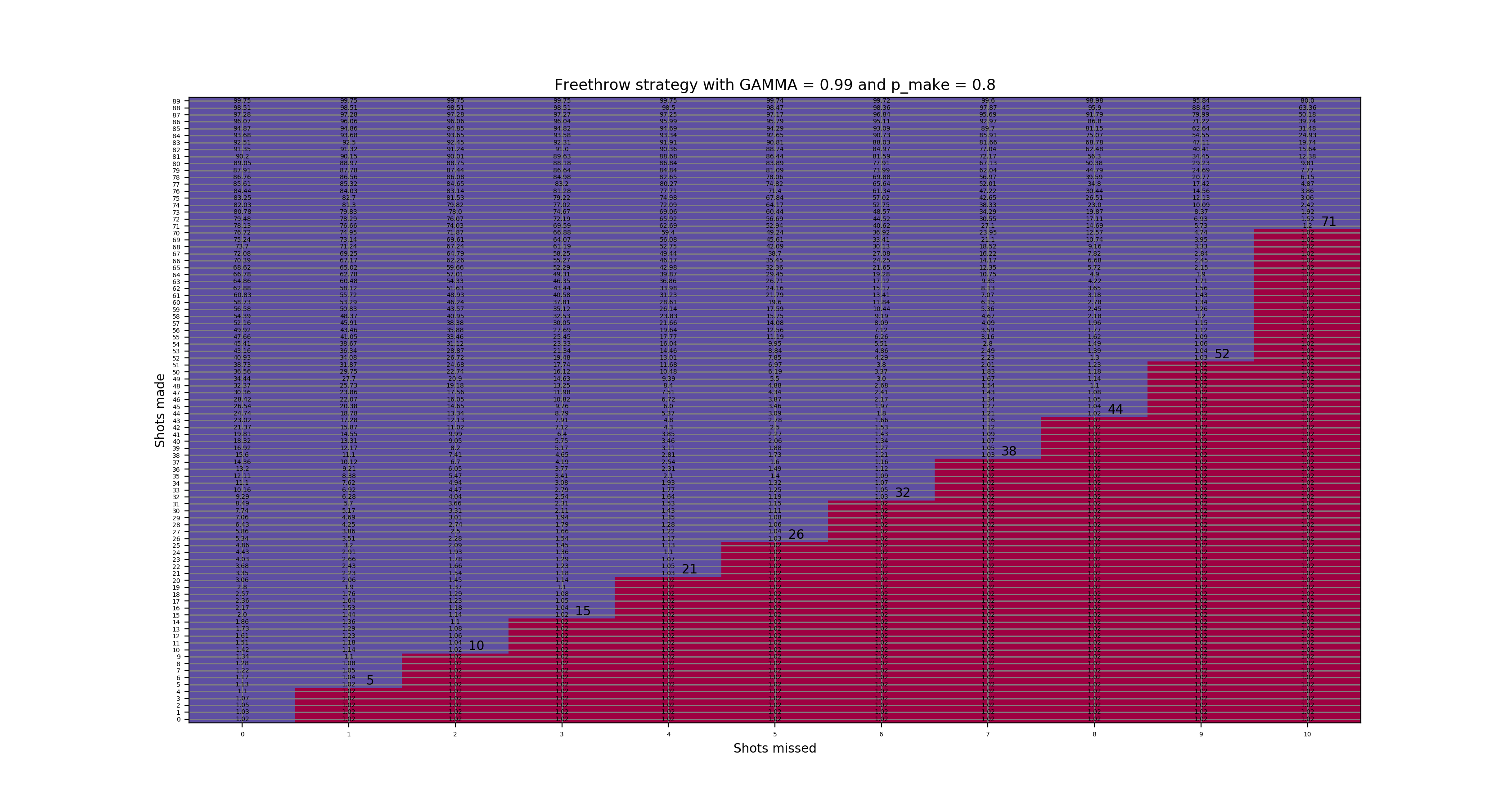 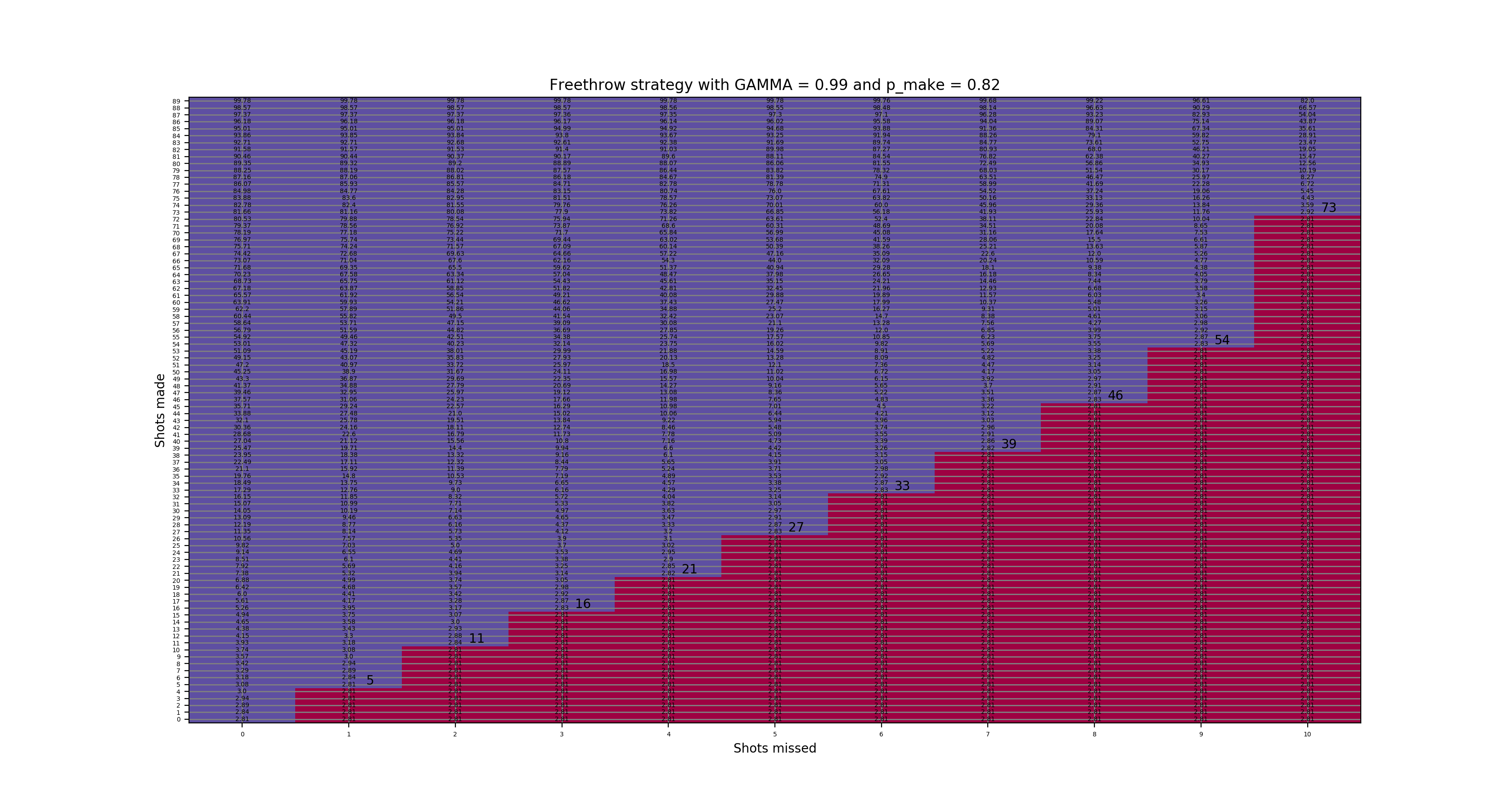 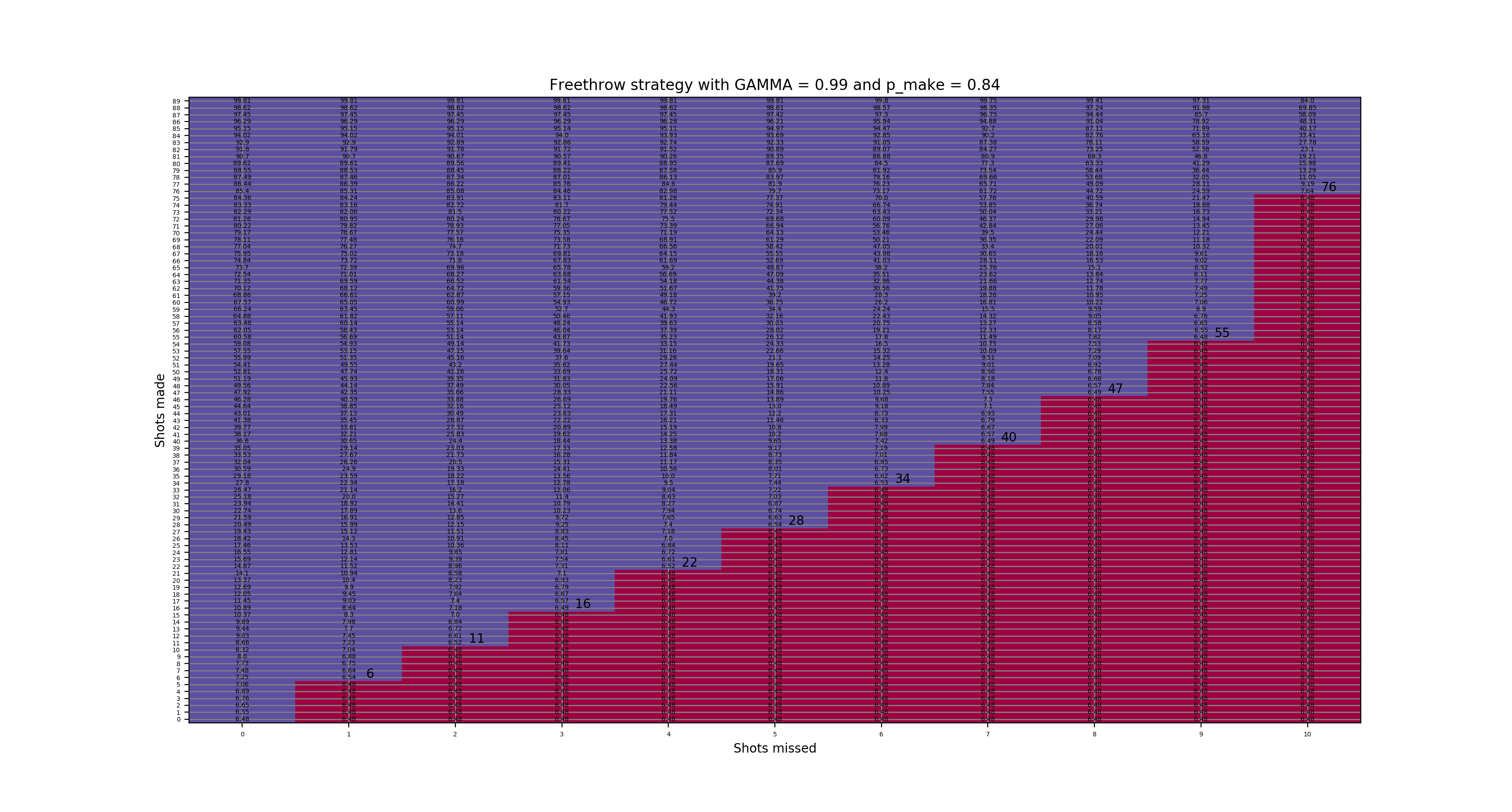 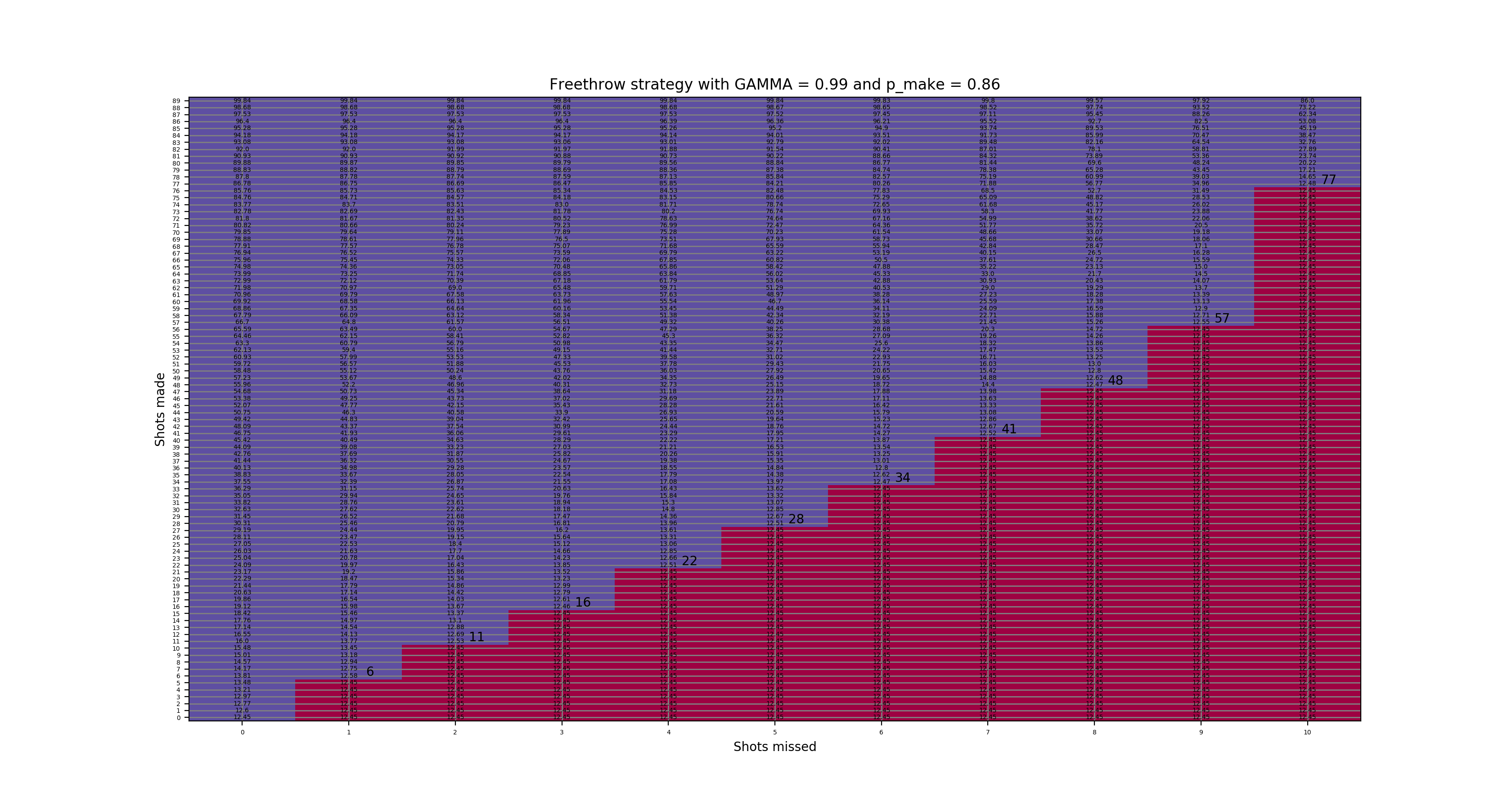